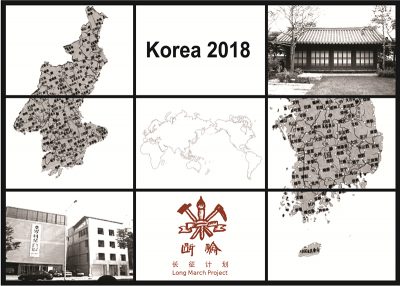 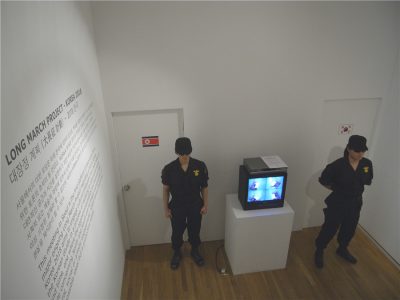 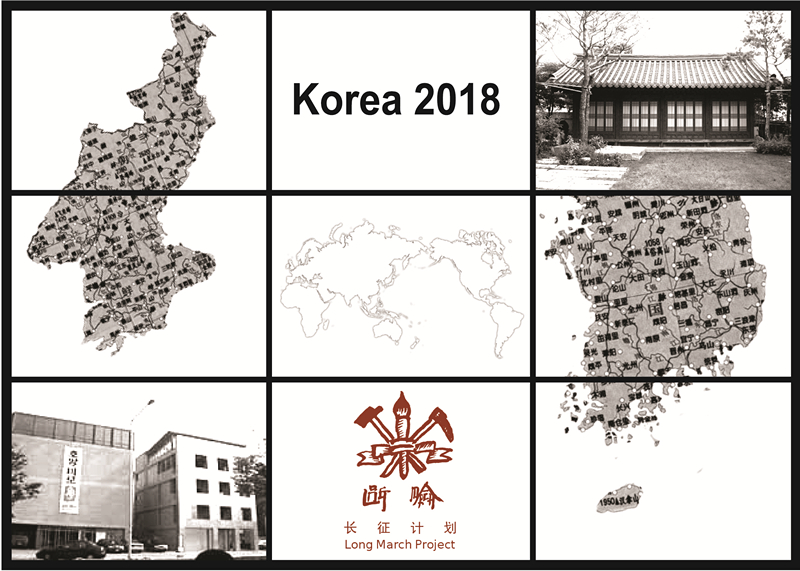 “Long March Project – Korea” was an art project conceived in 2005 and initiated in 2007. The project involved highly “confidential” planning in the mode of a think tank, achieving a creative collision between the reproducible identity politics based within contemporary cultural discourse and the fixed visual formulas created within the same discourse. The goal of the project was to mould and project a future vista in which the obstructions of contemporary national borders, boundaries, and cultural differences are opened and subverted. Project participants invited to partake in “Korea 2018” pretended that they were existing in a future time. In this future time, the opposing political and cultural views between North and South Korea are no longer the magical words of cultural, social and artistic exchanges.

The project presupposed that by 2018, North and South Korea would be re-unified and invited scholars, curators and art workers from North and South Korea to reflect on the writing of history and historical events that occurred in the imagined ten years since 2008 from the imagined future of 2018. This creative discussion took places at an inevitable point in the future, serving as an effective reference for the project’s theoretical production. As a result, numerous cultural patterns came to be constructed under the project’s pluralistic framework.

Based in the historical experience of Asia and the world’s political, economic and cultural development, the dialogue declared the possibility of dissolving the political and cultural gaps present in the opposition of North and South Korea, gaps carved out between opposing ideologies. The specific actions to achieve this included: 1) elucidating examples of socialism’s cultural forms and how these deal with transformations of the political system by means of discussion; 2) exploring the historical games played between Eastern and Western culture in Asian art history and use these as a basis for exploring the forces behind the development of art history; 3) exploring how the diplomatic negotiation process behind Korean reunification could in turn be used to redefine the meaning of “the contemporary”; 4) providing a deductive interpretation of the changes in the relation between socio-political reality and artistic production across the decade leading up to 2018.

The purpose of the dialogue was to understand how epistemological structures come into creation, thereby providing a roadmap for movements of social discovery and rendering opinions and seeking improvements on social meaning. This in itself represented a new form of social progress that promotes artistic creation. The discussion clarified the important role of culture as a basic visual economy in providing and interacting with all other channels and paths of human society. Moreover, in employing the existence of culture as a crucial component for the starting point in the development of a future society and politics, artistic expression is allowed to break free from the formal narrative methods of exhibition and display.

As an approach to think about socio-political development in the future, the visual economy discourse of Long March Project attempts to transcend the methods of exhibition and display for artistic expression. Here, the black box paradigm employed by transnational think tanks and negotiation platforms can be seen as diametrically opposed to the white cube paragon of art exhibition spaces. The latter emphasizes the formation of a mechanism of critical perspective faced with collective memory, the former attempts to intervene in steering the direction of the future by means of artistic action. “Long March Project – Korea” adopt the aesthetics of transnational think tank to undertake creative interpretations into the institution of authorship central to the circulation of contemporary art.  The project explored the characteristics of secret state visits, classified documents, middlemen and undercover agents, concepts for which the reproducibility of identity is not usually emphasized. The project comprehensively refined the exposure of these themes as they appear in mainstream visual culture and news media, ultimately coming to form the confidential aesthetic of the project.

As a starting point for further deepened discussions, “Korea 2018” expanded and explored the potential of how to create socialist movements, art and history in the present and future. The process of conceptualizing the complex fissures between time and space, was examined from an inevitable hypothetical future; the inspirations and experiences of the present and the past being empathetic with the diversified and parallel situation of a future (reflecting a more hopeful vision of tomorrow) in which reunified Korean Peninsula of 2018 is not an impossible ideal but a constructive reality upon which to build.