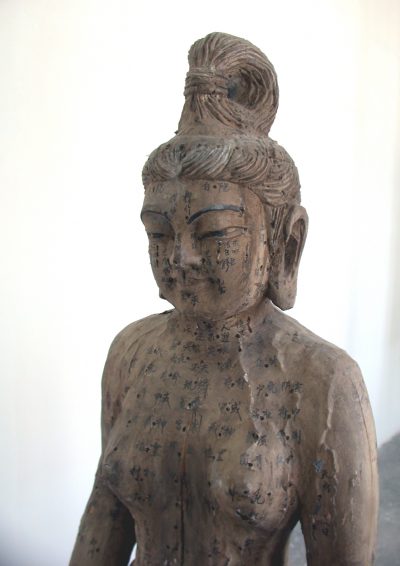 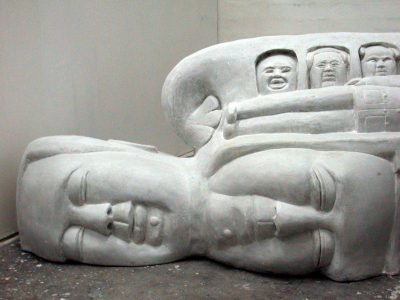 “Separate Paths”, the sixth and final installment of the project “Long March – Power of the Public Realm” will enter into the Long March Space 25000 Cultural Transmission Center on March 26th, bringing with it a new influx of artistic creation on the borders of Han and ethnic minority identities. The installment will mark the close the exhibition, “Power of the Public Realm,” and feature the works of the Xi’an-based artist Yue Luping as well as works done by artists from the previous installments.

The exhibition owes much of its inspiration to the establishment of a new Long March Space site in Xiaocheng village near Yan’an, Shaanxi Province over the New Year near an ancient “Xiongnu” (who also known as the Huns) cave dwelling. In February, Yue Luping became the first experimental artist to create a work in the Long March cave dwellings. Of interest was his proposal for “Separate Paths”: “The visual Long March should not and cannot correspond to the ‘historical’ Long March,” says Yue. “Currently, the already completed ‘Long March’ to a large degree has been trapped inside the ghost-like framework of the path and topics of the ‘historic’ Long March. “Therefore, it is necessary to ‘separate paths’ from the ‘historic’ Long March.” At the beginning, the curators’ position was to utilize a movement “from without to within,” and “from inside to outside’” to separate paths. “We must continually remind ourselves of this attitude,” said Yue, explaining his proposal. The “Journey to the West” to the cave dwellings, by walking towards the “western part of China,” “the West,” and “westerly” can separate paths from the historical “Journey to the West.” “We hope to utilize continuous ‘separate paths’ to blow open more cultural possibilities,” concludes Yue.

Imagery from the historic Chinese novel “Journey to the West,” and one of its primary characters, the Monkey King Sun Wukong was utilized onsite by Yue to engage locals in discussions on questions about migration, identity and “Chineseness,” further opening up inquiries into the public and social nature of art, nationalism and the West, and the development of western China.

On February 24th, Yue Luping began the second phase of his plan and “separated paths,” leaving the yellow loess of the Yellow River Plateau. Carrying his camouflage tent and the artistic results from the cave dwelling project in Yan’an, he stationed himself at the Dashanzi 798 Long March Space and began preparation on the new exhibition “Separate Paths”.

This time, the rectangular facilities of the Long March Space will be divided by the installation of a six-meter diameter Mongolian tent-style yurt, creating a contrast between the angular walls of the space and the curved walls of the yurt. The yurt also invokes questions of walking, settling down, and sparks discussion of the advantages and disadvantages of numerous walking and visual displays and communication models of the “artistic Long March” and the “artistic Journey to the West.” Lifting the exterior cover of the yurt, the viewer is encompassed on all sides by the “Separate Paths” exhibit, and a variety of visual, audio and video materials exhibiting and documenting the work done in the cave dwellings. Inside will be placed the very “Journey to the West/Long March” tent Yue Luping used in his journeys, the space between the tent and the “public realm” of the yurt will once again create a contrast between angular and circular as well as interject questions about the notion of the public realm and of the private sphere. At the end of the exhibition, Yue Luping will once again pack up his tent and head west, thus bringing “Long March – Power of the Public Realm” to its close.

On April 9th, 2004 after being completed in a lantern workshop in Daxing County, the Utopian Yurt was shipped to the Long March Beijing 798 space and became part of the Separate Paths exhibition.

In China, a Tatlin Tower, a cave dwelling from Yan’an, and a Hun yurt in the style used when they invaded Europe, were integrated into a rotating lantern.  Light penetrates through the curved doorways of the Tatlin Tower, and with order and at random reflects on the walls of the yurt.

On March 26, 2004 the second phase of Separate Paths opened at the Beijing 798 Long March space, serving as the finale for the exhibition Power of the Public Realm, the exhibition sought to wrap up the sounds, people, images, and information from Xiaocheng Village in a Mongolian style yurt and suspend the entire setup in the Long March space.

Inside the yurt is a rich new space.  Visually, what attracts the audience’s gaze are the series of portraits that enclose the viewer on the walls of the yurt.  These portraits are the images of the village inhabitants of Xiaocheng village.  Audially, people are attracted to a roaring sound coming from the “ceiling’ of the yurt.  Peering through the round ceiling, the audience follows the lens of a video camera and experiences the loess and blue skies of the Yellow River Plateau.  In the central part of the yurt is pitched a military style tent.  I began living in this tent over a month ago.  Above the tent is a ten layer “picture stratum”:  The very middle layer is composed of the same portraits seen on the walls upon entering the yurt, only they are smaller and hung horizontally instead of vertically.  The portraits on the other layers that emanate up and down from the middle layer of this “picture stratum” have been given an artistic effect, for example wooden engraving effect or bronze effect.  The yurt also has two “windows”: one has a television screen broadcasting a conversation I had with local villagers about nationalism.  The second window has a computer monitor is showing the implementation of Journey to the West.

On February 24, 2004 I brought the results from my work in Xiaocheng village and my tent to the Long March Beijing 798 space.

On February 10, 2004 I went to the Long March space in Xiaocheng village, near Yan’an, and began my work.  In Hun cave dwellings next to the Long March space, I held the first part of the “Separate Paths” exhibit.  The exhibition displayed a series of my works including such works as “Journey to the West” and a “Rice-paper Museum,” in which I used I used “Chinese painting methods” to collect Jacquemedies walking sculptures.  In the ancient cave dwellings:  I began discussion on nationalism and other topics with villagers, created a file of the villagers’ portraits, and investigated the identity of the village people.  During my time at the village, I also began to create works with the villagers.  After describing new events in the academic art world to the villagers, I would ask the villagers to use the folk art discourse that they were familiar with and create works to display their viewpoints on these topics.  The topics included the well known images of Sun Wukong (the Monkey King) and his original form, the geography of the Yellow River Plateau, and the fossils discovered by archeologists there.  I also investigated the nationality of thought and images, as well as the how open or closed thought was.  The villagers used paper-cuttings and paintings to create a series of artworks relating to these topics.

In January 2004, Lu Jie and the Long March team established a contemporary art space in the Xiaocheng Village on the Yellow Plateau, also known as the Long March cave dwellings space Long March.  I met Lu Jie while he passing through Xi’an.  Following that meeting, the idea of Separate Paths was born.

From September to December 2001, the renowned folk art and culture scholar and China Central Academy of Fine Art (CAFA) Professor Jin Zhilin and the artist Feng Yunshan from northern Shaanxi Province went to the village of Xiaocheng to collect folk songs and local cultural material to help Xiaocheng village in Tugang Township of Yanchuan District be recognised as an official folk-art village and start the Nianpan Yellow River Folk Customs Museum. The Nianpan Yellow River Folk Customs Museum is wholly collectively owned by the villagers who are also responsible for its founding and operation.

January, 2004, Lu Jie and the Long March team establishes a contemporary art space in the Xiaocheng Village on the Yellow Plateau, also known as the Long March cave dwellings space.

February 10th, 2004, Yue Luping goes to the Long March Space in Xiaocheng village, near Yan’an, to begin his work.

The village head carries Yang Ling Report and Archive of Journey to the West with him during cattle pasture.

The Archive of Journey to the West displaying in the cave.

The documentation of the residents at Xiaocheng Village, part of the artist’s work The Great Game.

On February 24th, Yue Luping began the second phase of his plan and “separated paths,” left the yellow loess of the Yellow River Plateau. Carrying his camouflage tent and the artistic results from the cave dwelling project in Yan’an, he stationed himself at the Dashanzi 798 Long March Space and began preparation on the new exhibition “Separate Paths.” 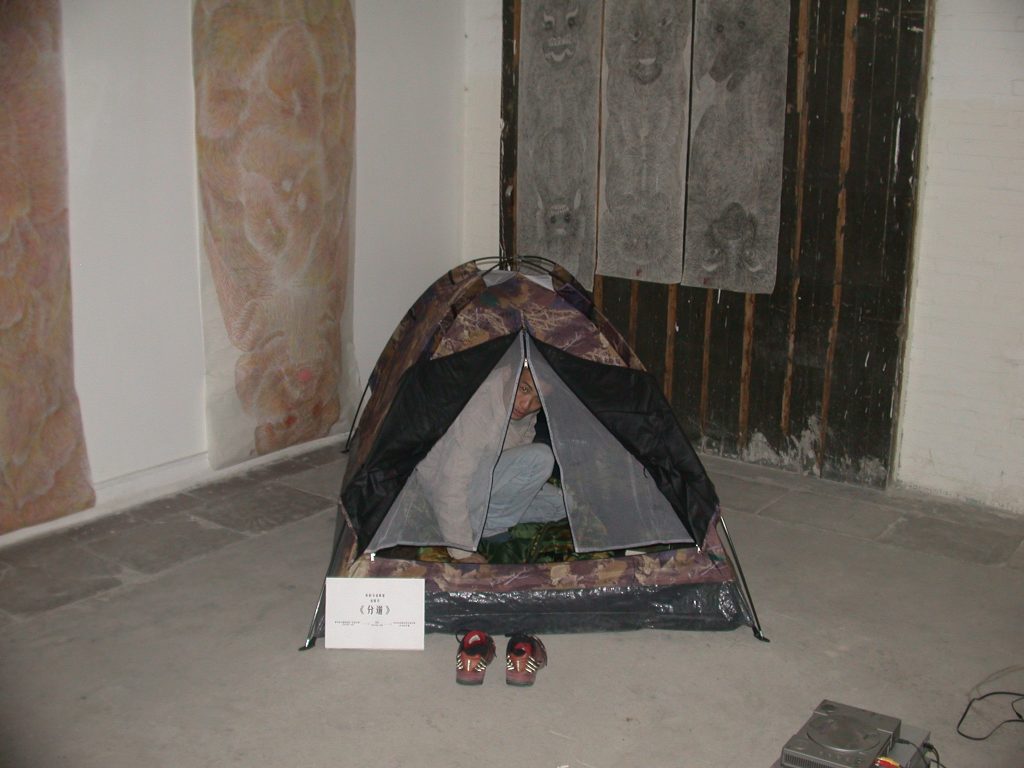 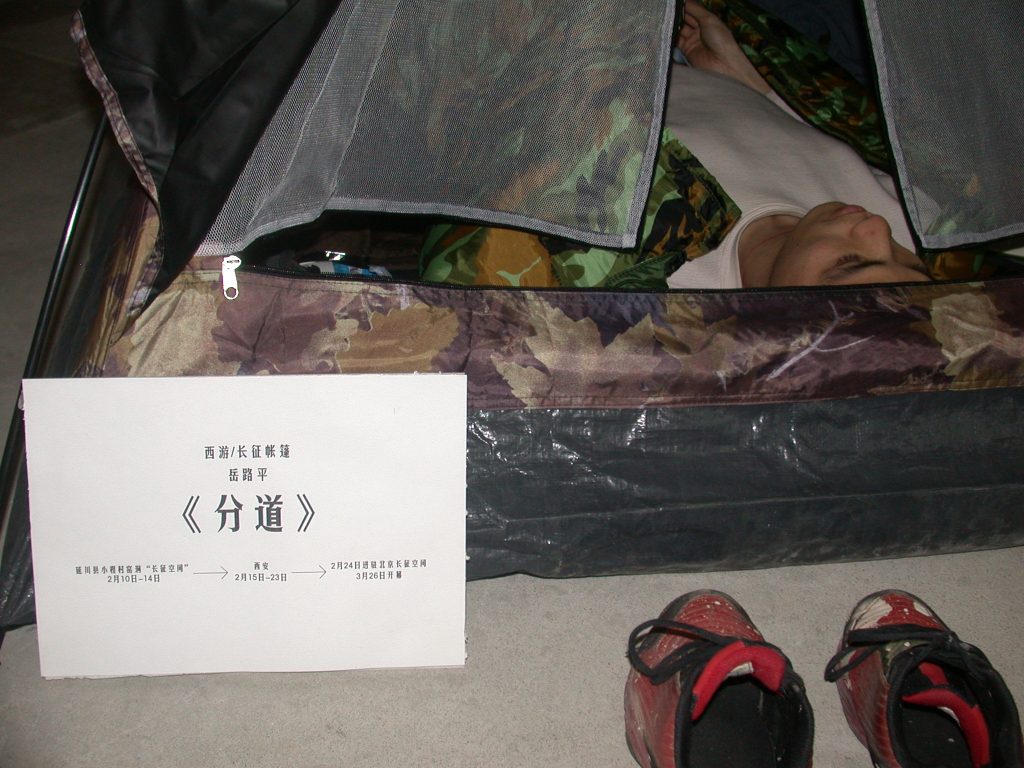 Yue Luping stationed himself at the Dashanzi 798 Long March Space