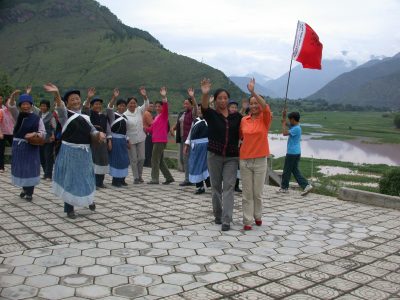 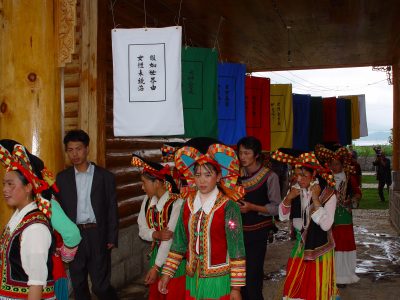 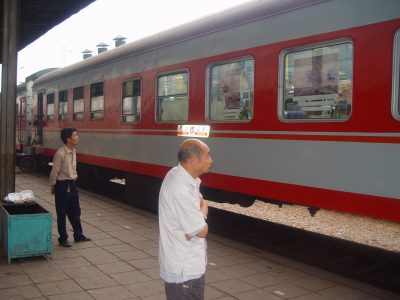 Site 7: On the Train between Kunming and Zunyi 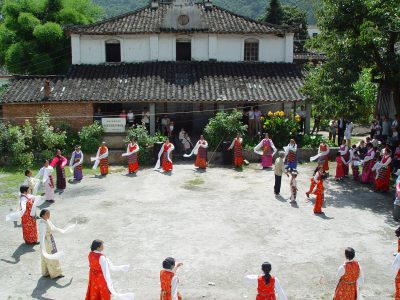 Site 12: From Anshunchang to Luding Bridge 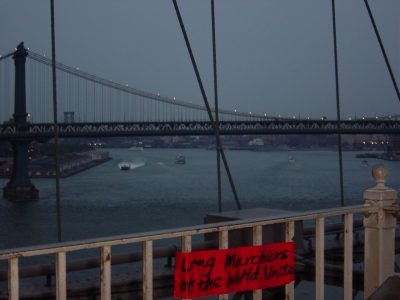 Works made along the Long March

The Long March curatorial crew arrived at Ciping, Jinggangshan, and triumphantly joined forces with other fellow artists including Wang Jin and Li Fang, who had arrived earlier in the day.

The day before, Wang Jin and his assistant stayed up all night tying the large swords to a rope.

10 a.m. The swords and rope were brought over to the site. The rain from the previous night had halted; deep clouds drifted among the chain of mountains.

11 a.m. The six assistants climbed to the top of the cliff to hang the swords from the rope. The other end of the rope was hung from the adjacent side. The swords were hung three meters in the air, forming the letter “V” and resembling the shape of a fern.

12:10 p.m. Wang Jin climbed up the rope to reach the top of the mountain. His assistants tied the rope tightly to his left ankle.

14:16 p.m. Wang Jin climbed down the rope. In the middle of the cliff, he turned his body so that his back faced the cliff. His legs were wide open and his hands were held tightly against his body. The letter V, formed by his whole body, hung without movement on the cliff, responding to the shape of the rope with the hanging swords. At the same time, a brisk wind began to blow, dispersing the deep clouds momentarily. The camera crew, observing from across the cliff, hurriedly took pictures so as not to miss this moment. Thus, Hanging Swords on the Wall, While Swords are Hanging Up-Side Down was completed successfully.

Wang Jin and the Chief Curator Lu Jie carried out a conversation on this work afterwards, followed by an interview with the film crew.

The Long March curatorial team arrived in Maoping, Jinggangshan, where the Red Army had taken temporary lodging during the Long March. Not far from Maoping are the former headquarters of the Red Army’s Fourth Segment, the site of the First Soviet Congress, and the former residence of Chairman Mao, commonly referred to as the Octagonal Pavilion. All restaurants, grocery stores and even parking lots in this village are named in honor of these sites.

As soon as the curatorial team entered the village, the soft sculpture figure carried on the back of “Qu Guangci” spurred the curiosity of villagers. A crowd gathered at the cornerstone from which Mao Zedong used to carry on conversations with the masses.

In the steamy hot weather, Qiu Zhijie offered cold beverages to the crowd, immediately winning him the position of king of local children. These children began to help set up the exhibition Documentation of Chinese Art in the 1990s in the empty souvenir stalls. On exhibit were digitally printed images and posters of various art exhibitions of the 1990s, which covered a wide range of themes, from various “contemporary works” and styles.

Throughout the installation process, the children showed interest in some of the works. They urged the curators to give them works to take back home. After just three hours in a public space, the exhibition would continue on the walls of the local villagers’ homes indefinitely.

At noon, Li Fang began his work Memory of Memory on the lawn in front of the Octagonal Pavilion.

His father was a former Red Army soldier and family stories of the Long March formed an important part of his childhood memories. Li Fang came to Jinggangshan, “the cradle of the Red Army,” to recall family memories, and to rekindle the memory of the Red Army. In those days, the Red Army had a literacy crew that left propaganda slogans everywhere, including “The Red Army is a Troop that Carries a Pen in One Hand, and a Gun in the Other.”

For his project, Li Fang first formed a long line of straw mats, and on top of them wrote words that remained in his memory from when he was a child. Gradually, he started to incorporate comments from onlookers, which led him to include traffic signs, as well as name brands such as “McDonald’s.” Under the burning sun, Li Fang’s calligraphy of propaganda slogans lasted four hours. The artist was completely worn out after the project’s completion.

The village children, who had already familiarized themselves with the curatorial crew, started playing with the pieces of red cloth used to connect the straw mats.

After successfully completing new works by Wang Jin and Li Fang, the next mission was to of install the Touring Sculpture Exhibition by two sculptors, Sui Jianguo and Qu Guanci. Sui Jianguo’s work consisted of a figure of Karl Marx dressed in a Mao Suit (approximately 120 cm high), along with a 20 cm figure of Jesus, dressed in an identical Mao suit.

In the pouring rain, the Long March main contingent arrived at the first exhibition site, Xingzhou, where historical Red Army slogans remain painted. Here, more than thirty slogans from the time of the Land Revolution during the late 1920s still remain on top of a gray wall. During war time, this revolutionary base area underwent continuous changes of hands, and the character for “Red” in the slogan, “The Red Army is for Workers and Peasants” was changed to “White” numerous times by the Nationalist Party.

After half a century, the Long March curatorial crew selected this space to exhibit artworks. Sui Jianguo’s Jesus Dressed in a Mao Suit elicited immense curiosity from local villagers, who stared in awe at the sculpture. In the end, the entire exhibition was completed by the hands of a two-year old child. “Qu Guanci” presented a work by Qu Guanci, at the same time by presenting the soft sculpture figure of Qu Guanci.

The second exhibition site was the famous Jinggangshan Drifting Site, where the crew created a one-hour long exhibition on water at the Zhusha strategic sentry post. Marx is seen standing still on a bamboo raft with a fixed gaze, traveled down the river amidst violently moving rapids. The Marx sculpture added dimension to the magnificent scenery, creating a dramatic and powerful spectacle along the river. Thus began the first “touring sculpture exhibition” of this kind.

According to the original map, the third exhibition was to be held inside a Catholic church in Huangao, Jinggangshan. Formerly, this church was the Red Army’s base camp for transporting goods. Upon arrival, the Long March curatorial crew discovered that what had been an abandoned church a few months ago was now completely renovated, with its large gate now locked tightly. With no other options, the main contingent broke into the church. There are many Christians among the Huangao villagers. Their reverence toward Jesus Dressed in a Mao Suit was expressed clearly in all their words and mannerisms. During the exhibition, an old lady had her palms put together in prayer, continuously begging for mercy.

This work continued through the whole journey of the Long March. He had made a special pair of shoes, which bear the character for “right” on the left sole, and that for “left” on the right sole. The imprints of “Left” and “Right” were to be left along the road. This work takes no form in many cases, lasting for but a transient moment. Qiu Zhijie launched this project today by leaving a chain of imprints for the first time in Maoping.

As in the original curatorial plan, the Long March curatorial team organized a film screening of Antonioni’s Chongkuo (China) for local villagers in the parking lot of the Chinese Red Army Hospital.

The preparation was completed simply by getting an electric source from the Octagonal Hotel, and hanging a screen from the window of its second floor. While some audience members left on account of bad weather, dozens remained to watch. The curatorial team decides to go ahead with its plan. Qiu Zhijie starts working on the computer under a rain cover while Lu Jie protects the projector from rain with an umbrella and explains to the owner of the hotel the significance of showing Antonioni’s film.

After the film was shown, the rain calmed. A video work, A Few Minutes of a Person, by Jiang Zhi was shared with the audience at last. It was already midnight by the time the curatorial team returned to the hotel after a long day.

The Long March curatorial crew arrived at Ciping, Jinggangshan, and triumphantly joined forces with other fellow artists including Wang Jin and Li Fang, who had arrived earlier in the day.