This phase of the Ho Chi Minh Trail project was organized in conjunction with Long March Education, an ongoing educational program focusing on the study of critical relationships between art, its production and the systems in which this visual practice is historicized and displayed. The residency program operated as a curatorial brainstorm for the Ho Chi Minh Trail project, with Zoe Butt (former Director of International Programs, Long March Project) acting as key facilitator, through which, eleven residents from five countries closely examined the shared physical and psychological landscape embedded within the Ho Chi Minh trail route. Throughout July, four thematic topics were introduced as starting points to discuss ways in which artists transform discursive material into visibility.

1. How are geographies border-lined by images and texts that become their own fictions bearing no relation to actual territory?

Examine the way images that are documentary in nature, popular in circulation or drawn from recited memory are used to explain or refer to factual occurrences. Hollywood, journalism, fashion, fictional tales, and individual artist’s works have become the way in which history is often remembered and celebrated. How can image-makers encourage, exacerbate, exploit or reveal the stereotypes or assumptions of history that can create social change? How can image-makers become map-makers that constructively re-link the migration flow of cultural influence? Particular focus could be given here to the various images circulating internationally concerning historical moments that have become stereotypes, or rather signs for dominant histories that have dictated how we understand the region of the Ho Chi Minh Trail.

The principle of strategy is a survival element of the human condition. However the plan and method of carrying out particular ideas or desires are often colored with gross self-interest or lack of regard for human life (evident in wartime military maneuvering, bureaucratic loop-holes in capitalist ideas of progress, repressive processes of questioning and torture under duress and not least the legacy of the colonial empire). In examining the mapping of human effort, be it social, political or cultural; sacrificial or celebratory; the majority is judged on the cunning manipulation of facts and figures, of who is trying to say what and why. The ability to command strategy is often led by an elite, wealthy or culturally privileged community or individual; however at other times it is the sheer will of a discriminated mind. What are the psychological imprints that have remained as a result of historical strategy? How are these strategies played out in the contemporary world of ‘game playing’, be they popular caricatures of political figures in fast food ads (such as the reference between Uncle Ho and KFC); or the recent spate of protest over the Spratly Islands between China and Vietnam; or the prevalence of self-censorship in cultural activities under a Vietnamese Communist government.

Propaganda, popularly defined as ‘information, ideas, or rumors deliberately spread widely to help or harm a person, group, movement, institution, nation, etc’ could be compared to contemporary ideas of capitalist promotion. How is language (textual or visual) becoming a promotional code by which neo-liberal desire ultimately directs this engagement with particular communities for other ulterior purposes? Where the stigma of ‘propaganda’ as a biased tool of persuasion is commonly associated with states of Communist thought, could the world of global capital not also be said to dictate or promote certain understandings, certain facts or fictions that best suit their market motivations? How have ideas of freedom of speech altered, diminished or been enhanced with the virtual interactive landscape? How can ideas of cultural capital be built according to local historical models that ensure a community’s sense of memory is the language of promotion? The distribution of information is always a biased situation, who is allowed to speak and for whom? How are our fears of persecution, of being misunderstood, of standing up against the dominant voice, how are these often self-inflicted restrictions creating limits on ideas of sustainable artistic communities?

The success of many strategies in human labor have been due to particular spaces occupying little visibility, as in, with a desire to operate outside a known system, to work underground, or to create a new network of space that is disguised. Much of the success of the Ho Chi Minh Trail was due to the cunning game playing of military generals who, at great human cost, devised new hidden pathways to move food, fuel and weaponry to its allies across a prickly, ever-changing set of controlled borders. How can/has the region in which the Ho Chi Minh Trail rests, worked a method of realizing cultural contemporary projects that have worked within limitations of cultural, social or political significance? How can the international audience better contribute or participate in these new models of working that enables the local community with an opportunity to better engage and empower the trauma of inherited social or cultural prejudice? 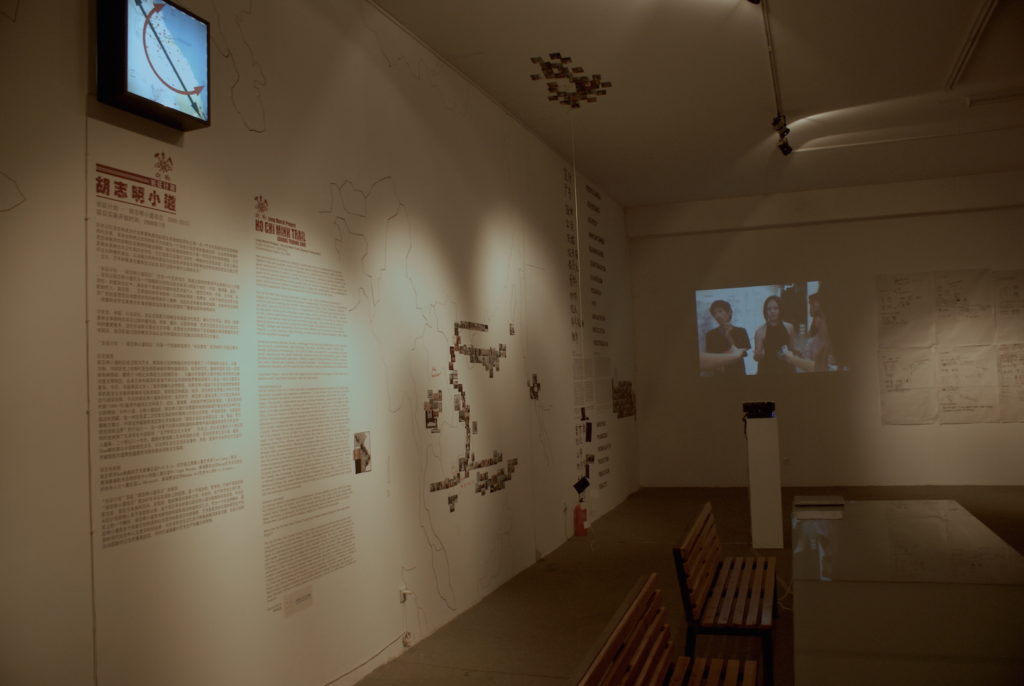 The curated presentation of the program